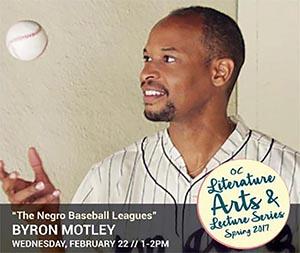 In celebration of African American History Month, filmmaker and entertainer Byron Motley will present clips from his documentary that brings to life a prosperous era featuring contributions by men and women who wanted to "Play Ball" bit were ostracized due to the color of their skin.

Byron Motley holds an MA in Music from USC.  He is a singer, storyteller, lecturer, filmmaker, photographer and author. Byron has performed on Broadway and worked with such luminaries as Natalie Cole, Celine Dion, Barbara Streisand and Barry Manilow.  He has also been a featured soloist with the Boston Pops Orchestra under the baton of Academy Award-winning conductor/composer John Williams.

The goal of his television documentary - Negro Baseball Leagues, An American Legacy - is to further educate the public about the significant contributions Negro League players made in the 20th century. Byron's father, Bob Motley, an umpire in the Negro Leagues for several years, brings a personal connection to this work.