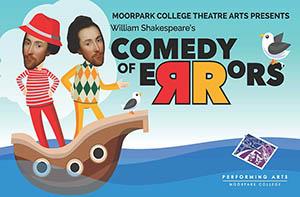 William Shakespeare’s
The Comedy of Errors

In this high-energy Shakespeare comedy, we meet separated-at-birth-twins Antipholus of Syracuse and Antipholus of Egeus and their also separated-at-birth-servants.  See where this is going already?  Mistaken identity and hilarity ensues as one brother tries to find the other, one wife is flabbergasted that her “husband” has fallen in love with her sister and then a nun shows up at the end riding a deus ex machina!  The Comedy of Errors really lives up to its name and is sure to provide laughter and an escape from our own comedy of errors.
Purchase Tickets
Contact: (805) 378-1485
Location: Moorpark College Performing Arts Center
Tags
Moorpark College