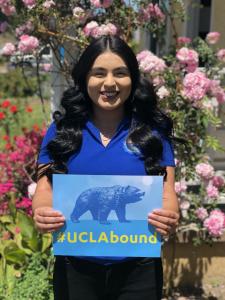 Student Trustee Jessica Martinez’s journey at Oxnard College began the day she drove to Condor High School to pick up her cap and gown and crossed paths with EAC Coordinator Leo Orange.

“I was on my way back to my car when Leo asked me to help him with a door. We got into a 45-minute conversation about my graduation, my future and what I wanted to do. At the time, I was working at a kiosk selling hair styling tools and had my mind set on going to cosmetology school. By the end of our conversation he had convinced me to enroll at Oxnard College,” she said.

Based on her counselor’s suggestions, she decided to study sociology and was immediately hooked. Jessica decided to extend her time at OC by another year to include anthropology, with the goal of double majoring when she transfers UCLA.

At OC, Jessica not only learned from her professors, they became role models. Professor Jennifer  Wilson-Gonzalez’s method for teaching history captivated Jessica and for the first time she felt like she was learning. The similarities in their life experiences and passions also resonated with Jessica.

“She definitely inspired me because if she could get out of that negative environment and make something positive of herself, so could I.”

Professor Jose Maldonado was another professor who impacted her life. “He assigned readings that represented people like me: first generation, people of color, women in education. I earned my first “A” on a large research paper in his class. He left a note saying it was something a university student would have written and that’s something I treasure,” said Jessica, who would like to come back to OC as a professor.

Maldonado’s investment in his students fueled Jessica to evolve into a stronger version of herself. He encouraged her to get involved in student government and persuaded her to apply for the student trustee position.

In Jessica’s first position as an ASG senator, she was promoted to the public relations officer. The job was perfect for her because she enjoys socializing and communicating with people.

Her favorite event was National Coming Out Day. She recruited students to partner with the ASG officers, and they saw wonderful participation and support from the campus community. The skills and confidence she earned through her role in ASG led her to apply for the student trustee position.

“My favorite part is working with people like [Administrative Officer to the Chancellor and Board of Trustees] Patti Blair, Trustee Josh Chancer and Board Chair Bernardo Perez. I say these specific people because they are so responsible, focused and hardworking and those are traits that I was able to strengthen while I was in the position.”

The position does not come without its challenges, but Jessica has used them to grow. Before the shelter-in-place orders, she was driving to the four campuses to meet with students, participating in the board meetings, prepping for them, going to school fulltime and working at OC. She learned through her first semester at ASG that if she didn’t care for herself then she would not be able to fulfill the demands of the position.

“One thing I have had to develop was consistency. It was important to learn to take care of my physical and mental health, ask questions when I needed to. If I had not, I wouldn’t have succeeded.”

Jessica has grown immensely in the last three years at OC and she loves the college for the impact it had on her.

“Oxnard College saved my life. I was going down such a bad path before I went to OC, and I am very thankful for everyone that has pushed me to where I am now.”

Michelle DeLeon is a Moorpark College alum and student at CSU Northridge. She works at the VCCCD District Office.