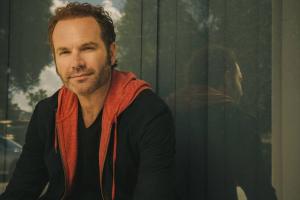 Access this press release in a different format: [DOC] [PDF]

Moorpark College is partnering with Grammy-nominated singer-songwriter John Ondrasik to host the “Concert for the Cats” benefit at 5 p.m. on Sept. 10. Proceeds from the concert will assist in the completion of America’s Teaching Zoo’s Tiger Retreat Habitat for Bengal tigers Neil and Karma.

Ondrasik, who’s known as Five for Fighting, and his wife, Carla, have hosted multiple charity concerts in the community and proposed to also host this benefit concert. Their son attends Moorpark College.

“Our family spends many Saturdays visiting Ira the lion and saying hello to his other animal friends and the amazing students and faculty. I can’t be more excited to support the wonderful Moorpark zoo,” said Ondrasik, who grew up in the San Fernando Valley. “I look forward to raising some needed funds for the zoo with songs and stories and listening to fantastic Moorpark College singer-songwriting students!”

When tigers Neil and Karma came to the zoo in 2017, they were each around 50 pounds. Today, Neil weighs 375 pounds, and Karma weighs 275, said Zoo Development Coordinator Mara Rodriguez.

“They need a larger enclosure, and the community can have a part in it by coming to the concert,” said Rodriguez. “Concertgoers will be bringing this project to the finish line. The new exhibit will include two sections for Neil and Karma with a connecting bridge that zoo visitors will be able to walk under.”

Neil was rescued as a 4-month-old cub from a private residence in the Hollywood Hills after being spotted in a popular YouTuber’s video. The cub was sent to America’s Teaching Zoo at Moorpark College to live and rehabilitate with his companion Karma, who was donated by another zoo.

Ondrasik’s collection of heartfelt songs are among The Great American Songbook. In 2001, he was nominated for a Grammy Award in the category of best pop performance by a duo or group with vocal for “Superman (It’s Not Easy).” His standard “100 Years” went double platinum. He is developing a musical series for ABC with Broadway composer Stephen Schwartz, as well as working on various television and musical theater projects that he has sold.

VIP tickets for the fundraiser are $125 and include an exclusive pre-show photo-op meet-and-greet with Ondrasik at 4:30 p.m., a tour of America’s Teaching Zoo with animal interactions, refreshments and reserved seating for the concert.

General admission tickets are $65, with seating provided. Lawn seating is $55; attendees are welcome to bring blankets or low beach chairs. Alumni tickets with seats are $50, using an email discount code sent to alumni. Tickets are $25 for VCCCD students with a campus ID and children (15 and under).

Handicap seating will be available, and local food trucks will have food for purchase.