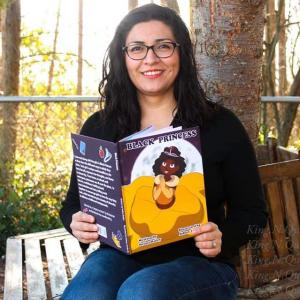 It was only two years ago that Helina Bailey’s work as a freelance writer and tri-cultural mother inspired the Ventura College alum to release “Black Princess,” a children’s book dedicated to the representation of Black children.

“Black Princess” is the first in a line of children’s books focusing on self-acceptance and pride for children of color, ethnic and multicultural children. Helina uses her platform as an author to reveal the weight of racial, ethnic and cultural representation, specifically in children’s literature.

Now, she’s expanding beyond children’s books to write a feature-length screenplay, while also finishing up her MFA in creative writing at Antioch University in Santa Barbara.

“I will always champion diversity and continue to write stories that focus on ethnic people, to better represent minorities,” said Helina, who currently lives in Knoxville, Tennessee, with her family while she pursues her passion for storytelling.

Although you might expect someone with so much literary skill to have only worked within the world of writing, Helina began her professional career as a cryptologic linguist in the U.S. Army. She served for a few years before devoting herself to being a stay-at-home mom.

She enrolled at Ventura College as a veteran student in 2019. It was her childhood dream to one day become a writer, and at VC she felt ready to cultivate and expand her talent for the beloved art.

“As a student worker in the Veteran Center, I had the opportunity to help fellow veteran students with their writing assignments and discovered that I love it! I realized many students dread writing essays and research papers, suffering much anxiety because of them,” said Helina, whose two sons remind her of the importance of her resolve.

Jumping back into school after a 10-year lapse was a challenge, but Helina made the most of her resources. Her promising position at the Veteran’s Resource Center, supportive professors, thought-provoking peers and enduring purpose were all sources of inspiration. And with that, she had one more thing to add to her professional bucket-list: teaching.

After only a year at VC, Helina earned associate degrees in social & behavioral sciences and in business management. Having already earned her bachelor’s degree in communications  and media studies from Dallas Baptist University, she was able to dive right into a master’s program following VC. She’s on target to graduate from Antioch University Santa Barbara with her MFA this year.

“My hope is to secure a position as an English professor once I graduate while also freelance writing so that I can share my passion for the written word with college students. I hope to ease that anxiety and encourage students to approach writing with a different mindset, while arming them with the tools they need to be a proficient writer,” Helina said.

As a Japanese, Native American and Colombian author, Helina wants to ensure that her children and other children who may struggle with self-image due to prejudice—particularly in the form of cultural preferences for Eurocentric beauty standards and systemic racist barriers to academic and career success—grow up without feeling discomfort, displacement or shame simply because of who they are and what they look like.

Her work covers cultural appreciation and the uniqueness of each individual’s path to happiness, success and self-love. To that end, she shares these words:

“My advice is to be yourself. Once you learn to love yourself and be comfortable in your skin, you take back your control. You can reject opinions that seek to push you down. I regularly exist in white spaces (currently living in a town with a 99% white population), and I hold my head high while doing so. I am here. I am proud of the trials and tribulations of my parents and grandparents, of my thick black hair and ethnic features.

I no longer want to fit into an idea of beauty that excludes everything about me! My people, my ancestors, persevered through unthinkable hardships and that made it possible for me to exist in a day and age when a woman of color can do and be anything! There is no stopping us now that the door has been opened.”